Shootout at the Okay Corral

Posted by Xenomanes on February 4, 2017
Posted in: Royal Household. 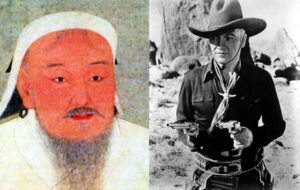 Genghis for centuries has had a fearsome reputation because of his large-scale slaughter of conquered populations. Numerically not approaching modern levels, but proportionally near extinction for the clandestine cohort .

Hopalong, on the other hand,  had a wooden leg.  Rude and rough  in his youth, he grew up to become a clean-cut, sarsaparilla-drinking man of many attributes. He was the first man to legally marry his horse, in a barbershop in Omaha.  Always a square shooter who would give a cocksucker an even break, he shot the chip off Roy Rogers’s  shoulder, and Dale couldn’t suppress the odd suppository.