Posted by Xenomanes on January 30, 2017
Posted in: Transmutations. 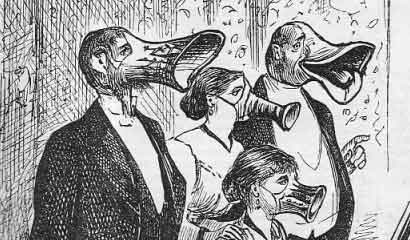 Fevers are kept away by the flesh of deer, as I have said, those indeed which return at fixed intervals by the salted right eye of a wolf worn as an amulet, if we are to believe the Magi. There is a kind of fever called “amphemerinos.” It is said that he is freed from this who drinks three drops of blood from an ass’s ear in two heminae of water. For quartans the Magi prescribe the excrement of a cat with the claw of a horned owl worn as an amulet, and to prevent a relapse the amulet should not be removed before the seventh periodic return. Who pray could have made this discovery? What sort of combination is this? Why was an owl’s claw chosen rather than anything else? Some more moderate people have prescribed the salted liver of a cat killed when the moon is on the wane, to be taken in wine before the access of a quartan. The Magi also apply to the toes and fingers ox or cow dung reduced to ash and sprinkled with children’s urine. They use the heart of a hare as an amulet, and give hare’s rennet before each access. There is also given with honey fresh goat’s cheese with the whey carefully pressed out. A remedy for melancholia is calf’s dung boiled down in wine. The right eye of a frog hung round the neck in a piece of undyed cloth cures ophthalmia in the right eye; the left eye similarly tied cures ophthalmia in the left. But if the frog’s eyes are gouged out when the moon is in conjunction, and worn similarly by the patient, enclosed in an egg-shell, it will also cure albugo. The rest of the flesh, if applied, quickly takes away bruises. An amulet of crabs’ eyes also, worn on the neck, is said to cure ophthalmia.